Cornish Wild Oysters 20 in Box – Great Flavour and so Fresh as experience on eating was Immense – Try Today.

What is the Best Way to Cook Oysters.

Top each oyster with a spoonful of sauce. Shuck oysters and place oyster meat and liquor (the clear and filtered seawater found within the half shell) in a bowl and place in the fridge. Melt butter in a small saucepan over medium heat. Add the milk and cream.

How to make Oyster Soup.

Cornish Wild Oysters 20 in Box When the milk and cream is hot, add the oyster meat and liquor, parsley, chilli flakes, and salt and pepper. Stir until combined, and heat for a few minutes but do not over cook the oysters. Sppon the soup into bowls, and serve with slices of sourdough bread. Mix all ingredients together in a small bowl, and place in the fridge. Cornish Wild Oysters 20 in Box

How do you eat Oysters from the Shell.

Loosen the opened oyster from the shell to make it easy to eat. How to serve oysters. The customary approach to eating oysters is to serve them raw. Typically, raw oysters are served on the half shell with plenty of lemon for squeezing, Tabasco sauce and shallot vinaigrette (mignonette).

The best fresh oysters usually come from the water nearest your home. Interestingly, West Coast oysters tend to taste sweeter, while those from the East Coast have a more mild flavour. A similar comparison could be made with oysters from the Gulf of Mexico that have an extremely mild taste because of their short growing season while those from Puget Sound have a very strong flavour and yet take longer to grow with a greater flavour.

Making smoked oysters is not a difficult process. It will go faster if you gather a bunch of friends to help you shuck the oysters. Cornish Wild Oysters 20 in Box

You will need 48 oysters measuring between 3 inches and 3.5 inches in the shell. We would advise to not have them too large or too small. The fresh oysters should still be alive. An easy way to tell is to tap the shell on a table. If the shell immediately shuts, then the oyster is still alive.

In a large non-metallic pan, combine all the ingredients for the brine. Stir until all ingredients are dissolved. This may take a while as the sugar may not easily dissolve, and you do not want it to stick on the bottom of the pan. Cornish Wild Oysters 20 in Box

Wearing heavy gloves (as raw oysters have very sharp points), use the bristle brush to wash the oysters under running water. Make sure to scrub them well to get all the dirt off. Hold the oyster so that the cup side is down in the palm of your hand with the hinge facing toward you.

Place the blade of the knife inside the oyster near the hinge. Twist the knife rolling it under the edge of the shell until the top shell and the bottom shell break apart into two separate pieces. Lift off the top and remove the oyster putting it in the brine.

Put two tablespoons vegetable oil in a medium saucepan. Add dried chili and let it cook over low heat until the chilli starts to sizzle. Be careful that the chilli does not catch and turn black. Add the remaining oil and red chilli flakes into the saucepan and cook until just heated through. Pour into an air-tight bottle. Let it cool until room temperature and refrigerate until ready to use.

The hardest part of making smoked oysters is to let them sit for 36 to 40 hours in the brine in an ice chest. The total time might not be as short as you would like, but it sure is worth it! Make sure to check the ice occasionally and replenish when needed. You may also let the oysters in the brine sit in a refrigerator at 40 degrees Fahrenheit. 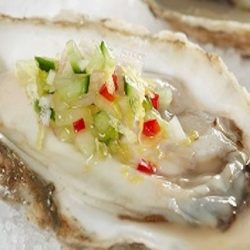 We use cookies on our website to give you the most relevant experience by remembering your preferences and repeat visits. By clicking “Accept All”, you consent to the use of ALL the cookies. However, you may visit "Cookie Settings" to provide a controlled consent.
Cookie SettingsAccept All
Manage consent

This website uses cookies to improve your experience while you navigate through the website. Out of these, the cookies that are categorized as necessary are stored on your browser as they are essential for the working of basic functionalities of the website. We also use third-party cookies that help us analyze and understand how you use this website. These cookies will be stored in your browser only with your consent. You also have the option to opt-out of these cookies. But opting out of some of these cookies may affect your browsing experience.
Necessary Always Enabled
Necessary cookies are absolutely essential for the website to function properly. These cookies ensure basic functionalities and security features of the website, anonymously.
Functional
Functional cookies help to perform certain functionalities like sharing the content of the website on social media platforms, collect feedbacks, and other third-party features.
Performance
Performance cookies are used to understand and analyze the key performance indexes of the website which helps in delivering a better user experience for the visitors.
Analytics
Analytical cookies are used to understand how visitors interact with the website. These cookies help provide information on metrics the number of visitors, bounce rate, traffic source, etc.
Advertisement
Advertisement cookies are used to provide visitors with relevant ads and marketing campaigns. These cookies track visitors across websites and collect information to provide customized ads.
Others
Other uncategorized cookies are those that are being analyzed and have not been classified into a category as yet.
SAVE & ACCEPT
%d bloggers like this: