Explore the possibilities of luxurious lobster with these decadent recipes. Treat family and friends to an indulgent weekend brunch or dinner, or make that midweek meal extra special.

Lobster cooked from Fresh and finished beautifully into a Shellfish Platter 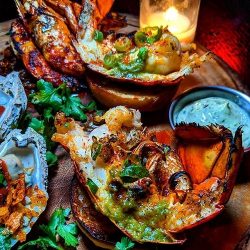 Although there many lobster varieties around the world, the two main ones are the American (or Maine) lobster, which is considered the biggest and best, and the European lobster, which tends to be smaller – they can be used interchangeably in recipes. Lobster is often sold cooked, but will be at its freshest and tastiest if you buy it live and cook it yourself. Live lobsters are usually a green-blue colour and turn reddish-orange when cooked. Males have denser, meatier flesh, but females have a more subtle flavour and an orange ‘coral’ roe that is often used to colour sauces.
Keyword Lobster, seafood, Shellfish
SHOP NOW